You should always take notes in your one-on-ones with the team, but how you do that is a tricky question to answer.

Do your brain a favor

Just the act of taking notes at all will allow you to process and retain the details better - especially if you write with a pen rather than typing. That's a well known way to improve your studying of any subject.

I write notes for a more important reason though - it gets it out of my head. As soon as I write a note in Evernote or create a bullet item in a Workflowy list my brain relaxes: great - no need to try to remember that any more.

Getting tasks recorded into the correct system as soon as possible is a critical skill for anyone, but especially an Engineering Director. You will overload your capacity to remember very quickly otherwise.

There will be times that you cannot take notes in real-time - taking your team member to local coffee shop or walking around the block, for example - but catch up when you return.

"Doing it later" will mean you won't take notes. You know it.

How to take the notes

This is the tricky part, and where the compromises kick in. There are three methods that I've tried:

I haven't tried recording the audio and getting it transcribed since that seems doomed to fail - I don't need 30 minutes of conversation verbatim.

One-on-ones are the most important part of an Engineering Directors job, so you want to maximize the time with each team member. You don't want to be spending more time taking notes than interacting - you'll come off like a court stenographer.

Hand-writing is the slowest method by far, then tablet typing, with laptop typing being the fastest. So you could argue typing on a keyboard would be most effective.

However, you'll want to make it personal, and that means face time, eye contact and empathetic engagement with the team member.

Laptops (or even worse, sitting behind a desk with dual screens) is the worst here - you're literally putting a barrier between the two of you.

Get out from behind the desk and sit with your team member. Remove any power dynamic; be just two team members chatting. Even an open laptop is a barrier of sorts, and constrains your body language.

With this in mind, writing in a moleskine notebook or using your phone wins, although since both are slower you'll want to keep the notes short, targeted and occasional.

To me it came down to these two choices - a small moleskine or Evernote app on my phone.

Both can work, with some caveats..

In the moleskine, keep an area of the notebook for each person, and use tabs or colored edges to organize them.

Start each entry straight after the old one by writing the date, and glance over the last week's notes to make sure you took action where required or you wanted to follow up on an earlier conversation.

FWIW, I've used a Pocket Moleskine (3.5x5.5") for years, with a saddleback leather cover (because it's beautiful). 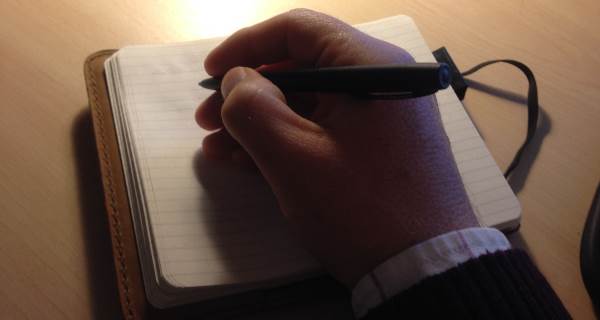 But there's more than one catch - you cannot search your moleskine for "who said that?", and you cannot back it up.

I was excited to hear about the Evernote Moleskine partnership since it merges two of my favorite products, but unfortunately it was not all that it promised.

The premise is that you can take photos of your notebook with the Evernote app, and it pastes a lovely corrected photo of your notes into a selected Evernote page. 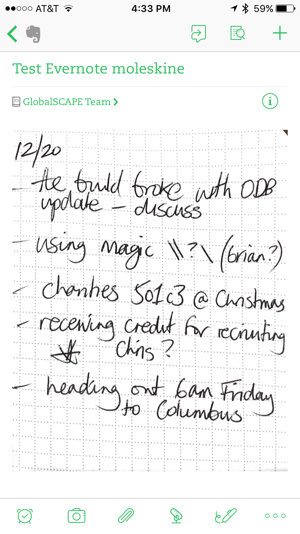 This works fine as a backup of your notes, but the text isn't searchable, and in the context of Evernote the photos are large and unwieldy - and you'll have to crop out any part of the previous note.

So it's an extra step that gains you very little and costs you more wasted time - on top of handwriting already being the slowest. There's just no ROI in the old Moleskine, so it now lives in my workshop as a sketchpad.

After experimenting with all these options and many (many) one-on-ones, I get back to using the trusty Evernote app on my phone.

It's small enough to not get in the way, it allows me to type quick notes that are synced and backed up to all devices, and I can search all the notes. I can take photos as needed.

I keep one page per team member, and always add a new entry at the top, above the older entries. It's really easy to glance at older entries since so many fit onto the screen at once.

The app syncs with my calendar, so as soon as I click 'search' it suggests that I open the note with a similar name as the 1-1 on my calendar, which is pretty cool. I'm still not sure how it does that, but it makes opening the correct 1-1 page almost instant.

I do have to tell everyone in my first one-on-one to excuse the phone - I'm not texting the wife - but overall the phone stays out of the way and is the best solution I've found so far.

No note taking method is perfect.

I've noticed that I've taken a note during a one-on-one when the team member is talking about something personal - my note may or may not have been related to that moment - and I know they just thought "what is he writing?"

Be mindful of that - when to take notes can change their perspective. You don't want it to be viewed as updating their personnel file. 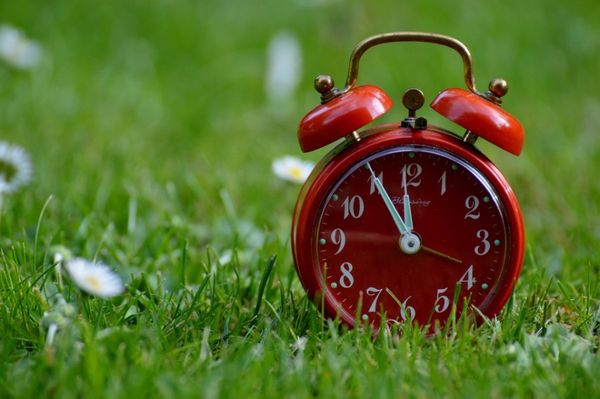 In the software industry it seems very common nowadays to assume you'll allow your team to work flexible hours and perhaps work-from-home. Or is that a myth? On the other side of the 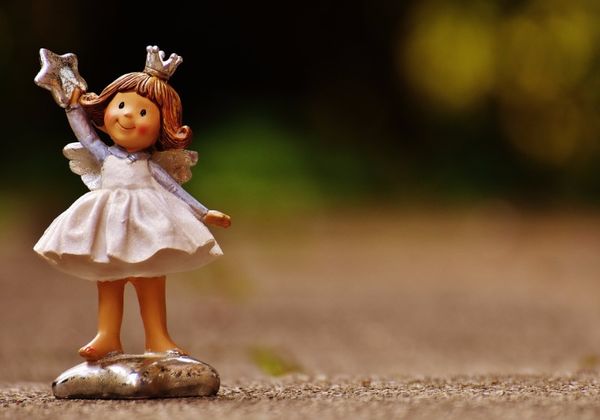